In the morning light, the tip of the mountains glowed bone white. Steady sediment lines ran the length of these monoliths, a jarring vision of geometry in a land so liberated from order.

Mammoth table top mountains rose from the desert floor, the layers of sand creeping up their rock faces until, perhaps, one day the sand would swallow the mountains whole. From the feet of the mountains, the ubiquitous curves of the Sahara sand snaked up towards the ridges in an iridescent play of shadow and light. 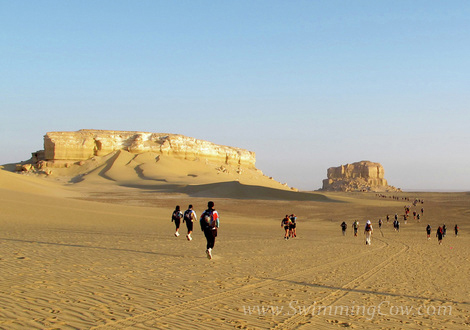 A brilliant start to Stage 4

It has been said that the Sahara has the presence of an unseen ocean. Having now seen it in person, I now see what they mean by that and yet, it remains difficult to place a finger on the Sahara’s allure. For generations, people have wandered into the Sahara in search of something – an adventure, a challenge, or simply a passage for caravans of goods. The conditions the desert presents are formidable, and not all who wander in manage to find their way out.

So why do we go out of our way to cross this great desert? If we wanted to experience adversity and Nature in all its might, there are a whole lot of other places in the world to prove our mettle. Why pick a piece of land where there is effectively nothing but sand, sand, withering heat, and more sand? 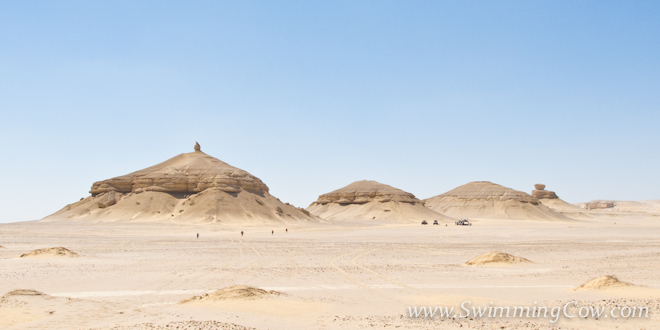 The desert has an uncanny ability to shrink people and jeeps to mere specks.

Would it seem incredulous if I said that I joined this mad foot race partly out of sheer curiosity? I once read that there are so many stars in our universe (not planets but stars just like our own sun) that if every single grain of sand on Earth were a star, there wouldn’t be enough sand on Earth to represent all the stars in the known universe. In fact the ratio is approximately one hundred stars for every grain of sand we have – and that’s just the conservative estimate.

The sheer scale of that comparison blew my mind. So of course I had to go get a better idea of just how much sand there was on Earth. That’s how you fit gargantuan concepts into digestible terms. And where better to start than the Great Desert of the legends, the Sahara itself? 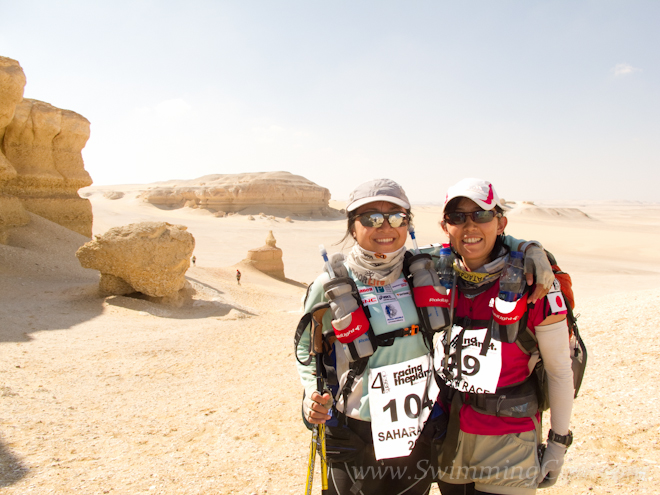 At the top of a steep climb with Mie-san, one half of the badass Japanese couple who chose this trip as their honeymoon.

Still, the notion of crossing the desert on foot on a week-long, 250 km self-supported race was every bit as intimidating, remote, far-fetched and impossible as it would have seemed to any rational mind. Just this February, I couldn’t make up my mind whether to sign up for this race or not. Now, I see that there never really was a choice. Curiosity always gets the better of me. 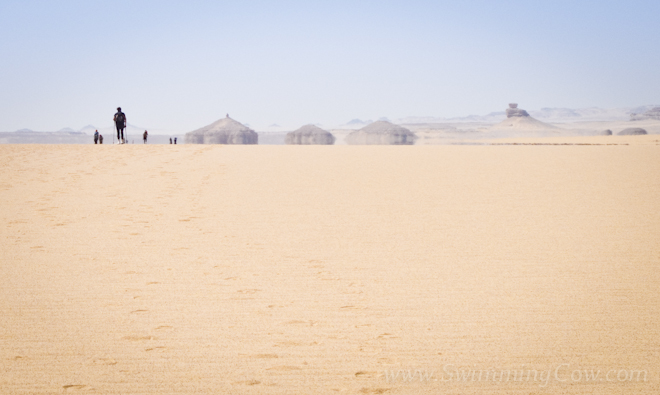 That is a lot of sand/stars in the universe.

The desert turned out to be every bit as mesmerising as the legends promised. On this day, Stage 4, I felt the full imposing aura of the Sahara. The truth is, the beauty of this desert is not like anything we’re accustomed to. You’d think in a land of such stunning landscape, something ought to move, if only to justify its grandeur. But there is absolutely no drama to the brand of beauty you find here; no torrents of snow to crash through in a violent avalanche, no larks to break into song, no trees to mark the passage of time, no swish of waves to fill the silence.

A twisting mountain in our midst

Despite its tremendous size, the Sahara makes so little fanfare about its own presence that if it were a living organism it might as well be a gnat. That nothing ever seemed to move or change here accorded the land an air of uncompromising immovability. We love to exercise our imagination and call the desert romantic, terrible, hostile, unforgiving, and so on. But in reality the Sahara isn’t any of that – because how could a desert set out with an intent to be hostile or unforgiving or beautiful? No matter how you try to spin it, the desert simply defies any adjective; the Sahara simply is. Still, in that state of effortless existence lay its true magnetism. 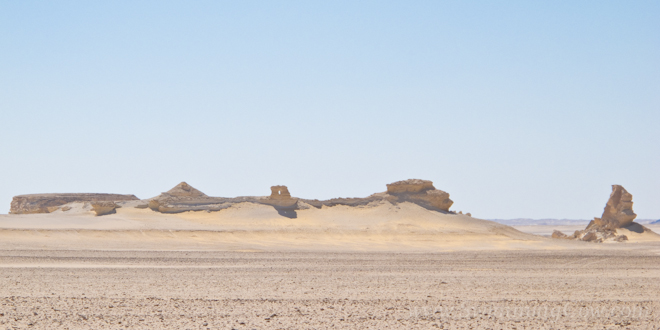 The many shapes of the Sahara – rectangular, pyramidal, arch, bump and squiggly.

I thought of the miracles and tragedies that transpired from this land – of travellers who, when stranded, had drank the radiator water from their cars in a bid to avoid death by dehydration. When that ran out, some drank the gasoline and their own urine; it was the only way to stay off the battery acid.

Some won in their bet against time and nature; others weren’t so lucky. I thought of the terrible ordeal that dehydration brings, as chronicled in excruciating, scientific detail by William Langewiesche in his superb book, Sahara Unveiled. An extract from the chapter on an ill-fated Belgian family:

Thirst is first felt when the body has lost about 0.5% of its weight to dehydration…

…Up to a 5% loss (about a gallon) the symptoms include fatigue, loss of appetite, flushed skin, irritability, increased pulse rate, and mild fever. Beyond that lie dizziness, headache, labored breathing, absence of salivation, circulatory problems, blued skin, and slurred speech.

At 10%, a person can no longer walk. The point of no return is 12% (a 3-gallon deficit), when the tongue swells, and the mouth loses all sensation. Because swallowing becomes impossible, a person this dehydrated cannot recover without medical assistance.

In the Sahara it may take only half a day to get to such a condition.As the body dehydrates in a hot desert climate, a disproportionate amount of water is drawn from the circulating blood. The blood thickens, and finally can no longer fulfill its functions, one of which is to transport heat generated within the body to the surface.

It is this heat that ultimately kills. The end comes with an explosive rise in body temperature, convulsions, and blissful death.”

I suppose when death becomes a release from the earlier tortures, “blissful” would indeed be the right adjective. In the Sahara, stories transpire by the simple virtue of one getting lost.

I didn’t know it then, but as runners our very own journey through the Sahara on this day was going to be a day of stories as well. 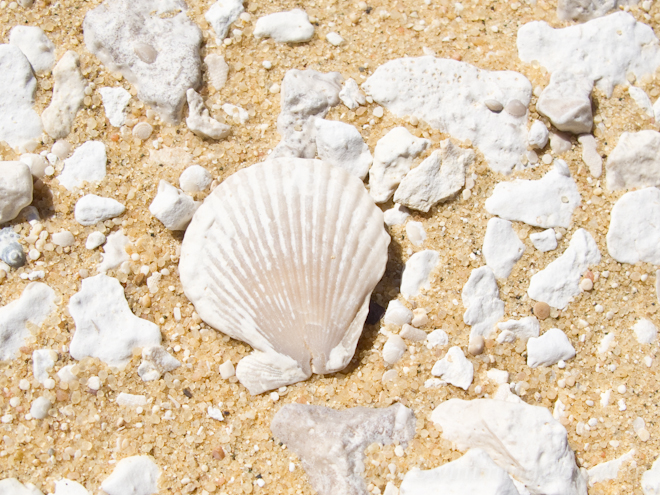 She saw seashells in the Sahara.

Up ahead, far beyond the reach of the mortal competitors, the front-runners of Sahara Race 2010 were having a show down. Up until this stage of the race, Anders had been in the lead. But today Ryan Bennett, his rival, decided it was time to go full throttle and make an assault on the lead. Ryan pushed ahead in what Anders would later concede as a “brutal pace”. The chips of the race had yet to fall.

Further back, the rest of the field was busy fighting their private battles. Ian McMullane was struggling to keep his pace even as some monster blisters were developing on his feet. A Korean competitor noticed Ian’s limp, and at a checkpoint passed him his own pair of trekking poles. In a 250 km desert foot race, giving up your poles is equivalent to giving up your legs. It was a gesture of generosity in a race packed with moments of such humanity.

And I – I got to meet Father Christmas.

Allow me to backtrack a little. There’s a 65-year old German competitor on our race who’s built like a tank (and walks like one, rumbling around like an indestructible force). For the race, he’s chosen an all-black outfit with a turban to match. To paraphrase one of my hilarious tentmates, “Even when he’s just walking around he looks like he’s about to take you down.” To top it off, the man has also got a handsome, full beard of silver that only looks even more badass against the black of his turban.

Earlier, the highly quotable Sam Wilson walked back into our tent, asking, “That man in black – you reckon he’s Father’s Christmas on holiday?” Which made a lot of sense, seeing that the Father Christmas we all know would spend the whole year up in the North Pole preparing presents with a town of elves. I imagine it’d be nice to get away from all that and just wander around in a simmering desert for a bit just before the pre-Christmas bustle.

So from that point on, German Badass was known to Tent 14 for all intents and purposes as “Father Christmas-otherwise-known-as-the-toughest-man-in-the-race”.

Anyway, here I am at Checkpoint 3 of Stage 4 of the race. From the burning pain on my toes I could tell I’ve got a new batch of blisters to treat and not a moment to lose. Plopping down onto a tiny stool, I coax a swollen foot out of my shoe and pull off the sock. Crouching to peer at my sole, I count 6 new blisters and pull out a needle from my first aid kit.

Just then, Father Christmas, who also happens to be at the checkpoint, rears up (because he does not simply “walk”). In a thick German accent he says, “Are you Jane? I am Volka. I like your blog very much.” He gives me the most badass thumbs up I have ever seen and sets off into the desert at a determined pace. And here I am, left blinking in the wake of his very dignified presence in my most undignified pose, with one foot propped up on a knee and a needle in one hand and a dirty sock dangling off a pinky toe, and not quite sure what to do with the revelation that Father Christmas reads blogs. 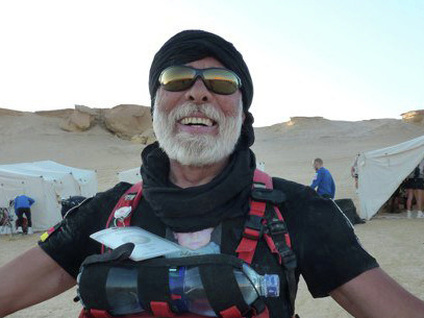