So they said the race will end at the Great Pyramids. Thanks to my hyper-active imagination, I had this vision of a surging 100+ man contingent charging towards the Pyramids from afar, raising dust from the horizon like Lawrence of Arabia on his horse. Oh, it would be a very grand affair indeed. That was the dream. Now the reality: we decamp, get on a bus and go on a ... END_OF_DOCUMENT_TOKEN_TO_BE_REPLACED

People often ask how it had felt in that moment of reaching the 94km finish line. Was I overjoyed, was I relieved, was I emotional? The truth is, I was none of those things. The wonders and rigours of the last 20-odd hours had drained every ounce of energy such that the actual crossing of the finish line hardly caused a ripple in the mind. The early moments of crossing ... END_OF_DOCUMENT_TOKEN_TO_BE_REPLACED

The darkness of what once seemed to be an endless night was fading fast. It was the 83rd kilometre and circa 5:45am. The air was still stubbornly cold but the sky was blushing pink; it was a matter of time before the sun found its way up the sky and roasted the land again. We were soon reaching the 24-hour mark since the start of Stage 5 of the race and I ... END_OF_DOCUMENT_TOKEN_TO_BE_REPLACED

We all die. The goal isn’t to live forever, the goal is to create something that will.”  – Chuck Palahniuk Checkpoint 2, a.k.a. civilsation and the mirage of a mirage At the 20km mark we entered the much-anticipated Wadi el-Hitan (Valley of the Whales), a UNESCO World Heritage Site. We were told that there would be million year old whale fossils here, a marquee point of the entire race. It was here where I ... END_OF_DOCUMENT_TOKEN_TO_BE_REPLACED 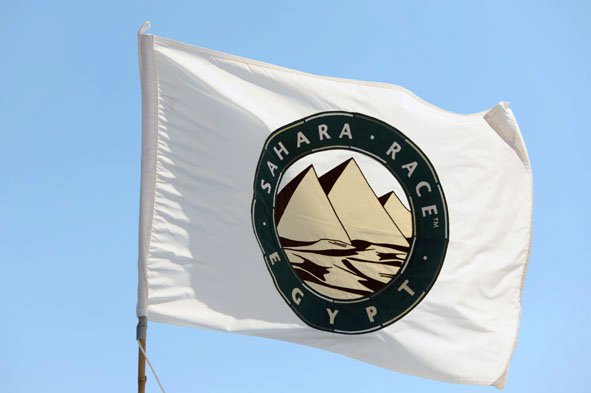 The morning we were to embark on the 94km Stage 5 of the Sahara Race, the sun rose punctually, without any sympathy for a handful of sleep-deprived runners stuck in a desert. At this point, you would expect everyone to be scrambling around, planning the last of our provisions and double and triple-checking our gear before the start. After all, on such a long stage every mistake is magnified and every gram on your back weighs that much ... END_OF_DOCUMENT_TOKEN_TO_BE_REPLACED

(Continued from the previous post) In the morning light, the tip of the mountains glowed bone white. Steady sediment lines ran the length of these monoliths, a jarring vision of geometry in a land so liberated from order. Mammoth table top mountains rose from the desert floor, the layers of sand creeping up their rock faces until, perhaps, one day the sand would swallow the mountains whole. From the feet of the mountains, ... END_OF_DOCUMENT_TOKEN_TO_BE_REPLACED 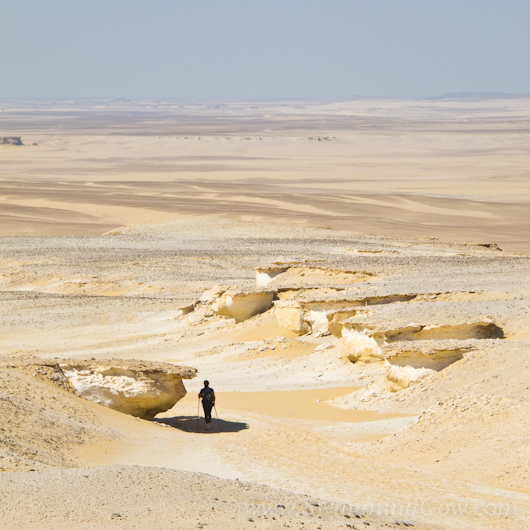 The Stage 3 marathon had done a number on us. By the time Day 4 rolled around, the drop out rate had already equaled the total drop out rate in past years’ races. And the distance was finally taking its toll – either you couldn’t keep any food down or you simply burned a lot of calories; whichever path you took you would have acquired a frighteningly gaunt look (Edward ... END_OF_DOCUMENT_TOKEN_TO_BE_REPLACED 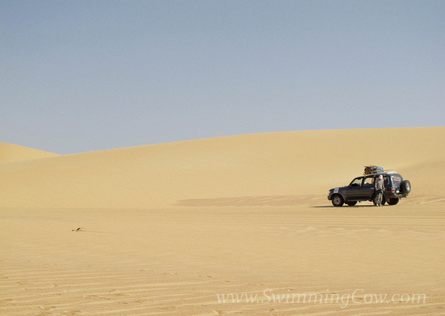 On Day 3, we rose to the havoc wreaked by a night-long sand storm. Everything in the tent – gear, clothes, bottles – was blanketed in dusty yellow. Simply sitting up in my sleeping bag caused a sheet of sand to cascade down my face. I spat sand from my mouth and tried my best to shake it out of my ears and hair – but it was mostly futile ... END_OF_DOCUMENT_TOKEN_TO_BE_REPLACED

The slow trek up the massive slope in the early stages If Stage 1 had been a survivor’s trek, then Stage 2 was an epic beauty parade for the Sahara – everything one could have dreamt about of the Great Desert came true today in ways far grander than the imagination could accommodate. I say, this climb looks rather steep. We started on a gentle but never-ending ascent up a ... END_OF_DOCUMENT_TOKEN_TO_BE_REPLACED 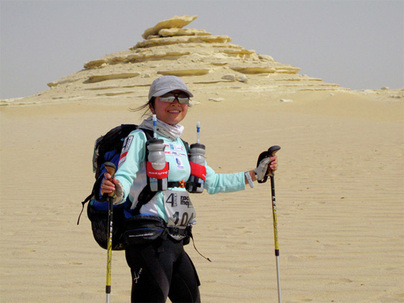 …A desert as vast as the United Sates… so arid that most bacteria cannot survive there… the Sahara remains a desert without compromise, the world in its extreme.” – William Langewiesche, Sahara Unveiled It would have been wonderful to be able to neatly wrap up the events of Stage 1 for everyone in one choice word. But since when did the Sahara Desert give due thought to something so trivial as ... END_OF_DOCUMENT_TOKEN_TO_BE_REPLACED