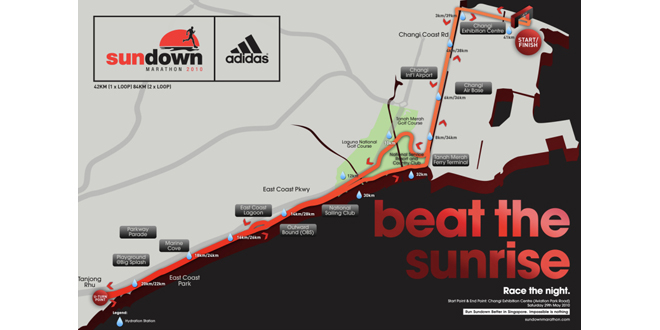 Snapshots from The Ultra: First 42km

NB: “Stages” noted below all mental and personal only

Stage 1
It’s 5:58pm, just shy of our 6pm flag off, and all 625 ultramarathoners (I know, right? Who would’ve thought we could gather this many crazies in good ol’ Singapore?) are heading out to the sound of drums. Before the first kilometre mark, I sense a bothering strain in my right calf. Thinking it’s the knee strap that I have still yet to break into, I rip off the strap and stuff it into the race belt. But the strain subsists and I know it’s a matter of time before it turns into a full fledged cramp.

Not good when there’s still 83km to go.

Thank goodness I find the root of the problem!

Lesson one: Do not tie shoe laces too tightly.

Spot Trish ahead and end up running with her for a bit. The sun is just sinking onto a pillion of clouds. Suddenly, we spot the Spindle Galaxy.

I did expect to see many great things throughout the night race but to suddenly find myself looking into what can only be a close-up of the Spindle Galaxy was unbelievable. You see, the clouds had gathered in such a way that they look to be the disc of said lenticular galaxy and the sun is hiding behind the curling strips of white, glowing like a disc. There’s no other way to describe it; this is the closest shot I can find to the sunset we witnessed and yes, that’s the real Spindle Galaxy. (All those astronomy classes in college apparently did not go to waste.)

The Real Spindle Galaxy A.K.A. The Sunset at Sundown 2010
Stage 2
We’re getting into serious business now. The runners are thinning out and the light of day has been stolen by Bangladesh and the like.I’m just hoping I don’t trip over some rock or roll my ankle over a pothole or do something phantasmically idiotic. That would be a very lame way of pulling out of the race.

Lesson two: You can’t run well on a full bladder so pace your toilet breaks. The porta potties do not come as often as you wish. And since the all-powerful Murphy decrees that the next porta potty will have 8 runners waiting in line just when you really need to go, it’s best to use one when you see one.

At around the 13km mark, I’ m slowing down and contemplating my first walk break. Completely justified, except some random runner I happen to be passing chooses to utter at that precise moment the gritty words, “C’mon. Don’t stop. C’mon!”

Which, of course, lights a fire beneath my arse and I’m off at a healthy trot for another 5km. Amazing, how unexpected words of encouragement from a stranger can fuel you for so long. So it’s a random showering of encouragements at others  and some way or another I’m at the 21km mark, a little worse for wear. On go the knee straps again.

On a side note, I recall seeing the front runner of the race passing the 27km mark just as I was reaching the 15km. Obscene, just obscene. But I guess that explains his 6 hours 18 minutes finishing time.

Stage 3
There’s a full moon tonight. A perfect column of golden moonbeam strikes into the black of the sea and the magic of night running slowly reveals itself.Happy campers and families staying over at the beach chalets are out shouting words of encouragement at us. They may be just passers-by but there’s something special in the air when you’ve got cheerleaders on the way who appreciate what you’re trying to accomplish.

That fuel lasts for another good 10km.

But the next stretch of the race is getting a little tricky as the crowd of runners thin out, accentuating the dark and lonely journey through the night. The drink stands seem to be growing further and further apart even though I know there’s one every 2km.

What annoys (and amuses) me is that foolish banner they have at the National Sailing Centre that we pass. They’ve got a sign that screams, “You think this is hard? Try sailing.” Yeah? Well I don’t see you lot getting the boats out for an all-nighter at sea. Thoughtless and utterly tasteless message. Clearly made without much thought to context. But even without there being an ultramarathon event, what good does such a holier-than-thou tone do anyway? Was is actually designed to… *gasp* persuade people to join the club?

Anyway, I am less than impressed. It bugged me during the 25km race last week and bugs me still. End of rant.

Stage 4
I am almost there, yet I am not. I desperately need to pee and there isn’t a %!*&$ portaloo in sight. The 30-42km leg stretches out like an endless road to hell. The last leg of the first half of the ultra is the hardest but most important leg I will have to run all night and I know this. If I can reach the 42km checkpoint before 11:30pm, I can pretty much jog / walk the remaining 42km and still finish before the 15 hour cut off.

In my head, I rehearse the procedure I have to go through at check point for the 11th time or so, if only to keep myself sane. Re-line Vaseline, grab iPod, reload race belt, slap on pain patches, change wrist band, restock electrolytes, eat bananas. Change of socks no longer happening. The feet feel pretty swollen and I’m not sure I can jam them into another pair of socks if I took this pair out.

In any case, if all goes well I should be out of the blocks again within 30 minutes, just enough to narrowly avoid the crush of marathoners whose flag off is at 12 midnight, the Cinderellas that they are.

But running against time is no fun at all. The 42km mark is mind numbingly far away right now. All that’s left is to do is grit your teeth and grind it out.