People often ask how it had felt in that moment of reaching the 94km finish line. Was I overjoyed, was I relieved, was I emotional? The truth is, I was none of those things. The wonders and rigours of the last 20-odd hours had drained every ounce of energy such that the actual crossing of the finish line hardly caused a ripple in the mind. The early moments of crossing the line are a haze. I recall Vanessa waiting at the end as the steady beat of campsite drums called me home; I remember getting a blissful neck and shoulder massage (a pampering of the highest order after such a trek) from Vanessa; I recall asking for a chair or something to sit on, because I feared that if I laid on the ground I may never get up from that spot again.

On this sixth day of our desert adventure, the sun rose high and fierce against the skies, as if determined to give us a proper desert send-off on our last day in the wild. The air smoldered like a furnace and as I took the slow, leaden steps towards my tent, each granule of sand beneath my feet burned with the might of a miniscule sun.

Tent 14 resembled the abandoned battleground of a recent desert war – bottles of water knocked askew, backpacks spilling their bowels of bandages and needles onto sandy ground, and bodies sprawled over a confusion of bric-a-bracs, snoozing away with a towel draped over their face. A flurry of flies swarmed over the motionless bodies, picking at the dirt and sweat of skin. The scene would’ve been grotesque under most circumstances. But the desert had taught me in the last few days that comfort was just a relative concept. I dumped my bag to one side and joined my tentmates in their death-like repose.

The rest of the day churned by in a thick sludge, the snail-like pace magnified by the oppressive heat. Even the normally breezy tents became an unbearable oven. The only refuge were the leeward side of the tents where the sun had cast a shadow. So we all snuck into the narrow slivers of shade and waited for evening to come. With our biggest task of the journey out of the way, conversation flowed like cheap wine, punctuated only by the occasional drum beat heralding the arrival of a competitor at the finish line. I quietly sipped the tranquility of the moment, contented.

Riding on my streak of an embarrassingly healthy appetite, I scampered about camp for spare food and managed to get some oatmeal off Anders for dinner. (I am not picky, given the circumstances.) Speaking of which, a huge WOOT! to the crazy running machine who signed up less than a month before the race and did both Denmark and Singapore proud by winning the race. 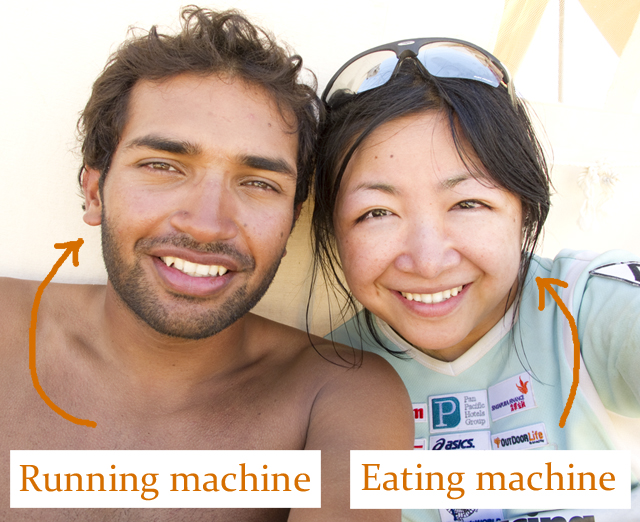 At around 3:30pm in the afternoon, the camp roused in a wave from its afternoon stupor. Something was coming towards us across the horizon.We got to our feet and left our shades to gather around the finish line. For the final time in Sahara Race 2010, the pounding of the drums rose above the sand. The last competitor was about to arrive, 33 hours since the start of Stage 5.

It was Dong, a Korean pastor in his fifties. The sweeper camels came in with him. Slowly, ever so slowly, he made his way through the meandering course, and his effort to reach the finish line was evident to all. We cheered him on as one. When he crossed the finish line, there were no theatrics to the manner of his arrival. Two steps past the finish banner, despite being clearly exhausted, he paused to take a long, deep bow which conveyed everything that needed to be conveyed about our journey in the past week – the pain, the struggle, the exhaustion… the doubts, the fear, the defiance of all that ran counter to our intention to complete… and above all, the gratitude for the chance to grow mentally and physically amidst one of nature’s most dramatic settings. 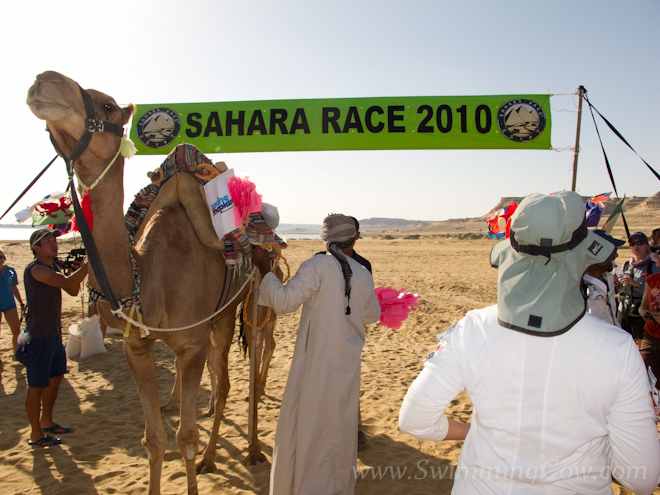 Sweeper camel being completely blasé about having to cross 248km over 6 days.

The Egyptians helping the race organisers promptly formed a conga line of sorts and led us through the dancing and singing for the rest of the afternoon. 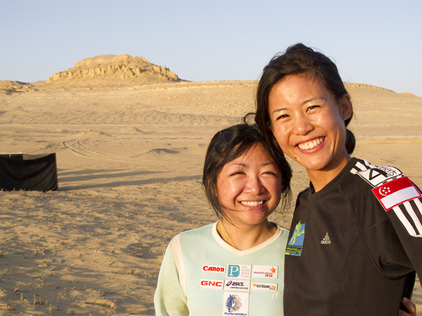 Two 100-watt smiles and the infamous latrines (in black behind us).

Before we knew it, nightfall was upon us and the stars that had shied away at the first light of daybreak came out to play once more. Temperatures cooled and an easy breeze picked up by the lake. We queued up before the campfire for hot water and, for the last time this race, rehydrated freeze-dried delicacies for dinner. I treasured each passing moment, knowing full well that I may not have the luck to do this again in a long time to come.

After dinner, a group of us gathered around to idle the night away. Choon Poh was tweaking the settings on Joy’s DSLR in a futile attempt to capture the beauty of the Saharan night sky; Trish and I tried to tell the stars and satellites apart, Eric LaHaie weighed in on life in Hong Kong while Wei Yong, the standup comedian of our trip, cracked yet another howler that sent us all tumbling around the soft desert floor. I laid on my stomach, taking in the conversation with the night wind as I slipped a scoop of sand back and forth between my fingers, letting the strains of cool, soft sand fall in my palm as in an hourglass.

Above us, the stars slid as one across the sky with the passing of the hours, never for a moment losing their place in the vast spread of heaven. It struck me then how short this journey had been – how could it be the end already when it seemed only yesterday that we were pitching our tents at Camp 1? There was still so much I wanted to see here, so much more I wanted to learn.

I wanted the evening to last forever, but the stars answered with an inexorable march to the west. That night, as I slept, I dreamt of a garden strung with stars. 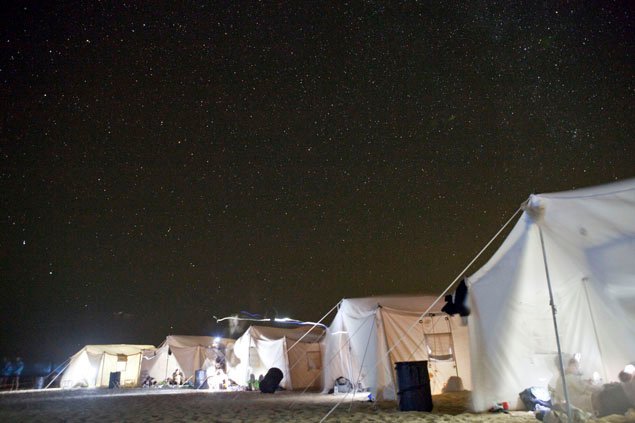