We all die. The goal isn’t to live forever, the goal is to create something that will.”
– Chuck Palahniuk

Checkpoint 2, a.k.a. civilsation and the mirage of a mirage

At the 20km mark we entered the much-anticipated Wadi el-Hitan (Valley of the Whales), a UNESCO World Heritage Site. We were told that there would be million year old whale fossils here, a marquee point of the entire race. It was here where I saw the most curious desert vision I had yet to experience: a row of black triangles, some right-side up and some upside-down, all perfectly aligned besides each other and apparently floating in mid-air. Good grief! I’m only at 20km of a 94km stage! Am I hallucinating already?!

Thankfully, when I got closer it became clear that these triangular apparitions were windows carved into adobe huts. Not just any hut, mind you. These huts formed the tourist info centre, souvenir shop and the most exciting part of them all… the toilet!

After a week of using the most basic camp latrine (which wholly involves the simple act of squatting and trying not to look at the bucket of mangled human waste beneath you), finding modern plumbing, running tap water and a perfectly normal porcelain toilet bowl (made by TOTO, no less!) was a miracle. And they supplied toilet paper!!! Remember: this is a self-supported foot race where everyone has to bring their own provisions and toilet paper is such a scarcity that it’s as prized as gold. (Probably worth more than gold, come to think of it, as you can’t wipe your arse all that well with gold.)

It was also a sobering moment to realise I was overjoyed at being in… a toilet. This has got to be a new low in life.

Anyway, I don’t think we came all the way to the Valley of the Whales just so I can gush about the toilets.

Imagine, if you will, a graveyard of mammoth peach pits, some irregular in shape, some humanoid in profile, others rounded and all pockmarked by what appears to have been a heavy spout of acid rain. The rocks are massive – each an enormous boulders capable of crushing you dead. And nestled between boulders are the fossils of still larger marine life that had once swum across this very area. The whole thing had a very Gulliver-in-Brobdingnag feel to it. 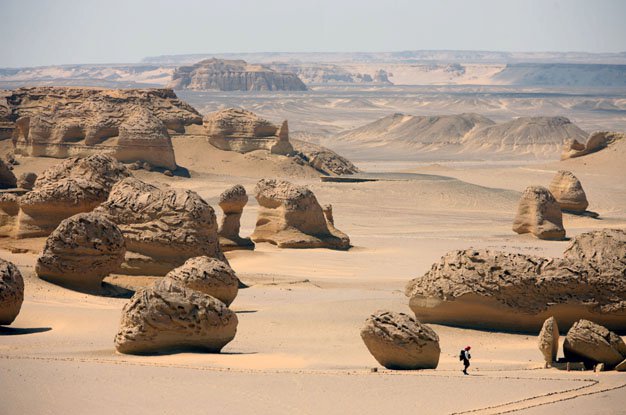 Finally going through the Valley of the Whales

Sunset on top of the colossal dune

The rest of the 94km is filled with similarly breathless moments:

– It is the 30th kilometre. I bust out the iPod as a reward for crossing this milestone. After being cut off from music for almost a week (everyone has been saving their iPod battery for Stage 5) the opening notes to Glee’s cover of Defying Gravity gave a burst of unexpected euphoria. I swear, I have never heard music this sweet in my life. The sound of civilisation! I am truly getting closer to home with every step. The notion strikes me from left field and I find myself inexplicably close to tears.

– It is the 41st kilometre. We are simmering in the high heat of the day. A checkpoint lies within sight, set halfway up a colossal sand dune. Two competitors ahead are working their way towards it, but something is amiss. They look like they are in the exact same spot on the sand dune as they had been a minute ago. But they are moving, no? Unless… right on cue, the zig-zagging jeep tracks on the dune confirm it: the dune ahead is steeeep. The jeep could only go up sideways; driving straight up could have caused it to flip over. This is why the competitors ahead of me seem to be running on the same spot. Oh, yeah. The dune ahead is hellaciously steep.

– It is the 47th kilometre. The sun has just deserted the day, carving the Sahara into a purgatory straddling night and day: it is too dark to see the path ahead, too bright to glimpse the stars above. The utter isolation of the twilight hour is gutting. It seems surreal that I had last seen people a mere 7km ago; how could this be when it feels like I am the last person on this planet now? I am sure of it: there is no other soul left on Earth. The desert really does play tricks on the mind. I have never seen the Sahara in this light before. On the normal stages of the race, each of which were less than 45km, by sunset I would be safely back in camp, huddled over a crackling fire with dinner in hand and friendly chatter all around. We never had to confront this side of the desert on our own.

– It is the 52nd kilometre. Surely I’ve aged two and a half lifetimes since dusk. The one thing that spurs me on is the faint memory of a promise to never stop moving until I cross the finish line. A glow in the distance hints at a checkpoint. My heart leaps – but only for a micro-second, for straight after that I realise that the glowsticks are dancing in the air. I think I’m losing my grip on reality.

Thankfully, it turns out not to be a mirage but just a volunteer waving the sticks about. I tumble into the checkpoint and realise I am shaking. It’s probably fatigue, hunger, cold, or fear, or a combination of all four. I eat, I replenish my water, I change into a thermal top for the night ahead. I don’t relish the prospect of heading out into the desert darkness alone. Jennie Peterson and I decide to team up, and together we march back into the hollow night.

– It is the 59th kilometre. Checkpoint 6 carries with it the unique promise of hot water and a tent for a nap. We can’t possibly be far from our oasis now but the blisters are biting back with a vengeance. Every step is bloody murder. I feel as if I’m walking on water balloons, except each aching step reminds me that the balloons are really my feet. Amidst this endless torture, I do discover some comfort: if you keep up the pace you will find that you get used to the pain eventually. Your body comes to accept every step of agonising squish of flesh and water as a necessary pain. The trouble comes whenever we stop to pee or to adjust our gear; once you break your strike it is doubly difficult to get going again. I distract myself with the curious piece of cloud floating overhead. Suddenly, I’m reminded of the wisdom of a fellow runner,

It’s going to be all heart from here on out.

– It is the 63rd kilometre. The desert wind picks up just as we reach a bustling Checkpoint 6. It’s been almost 15 hours since I had a proper meal but being back amongst familiar faces is rejuvenation in itself. Avi the Angel helps me with the hot water (because anyone in possession of hot water in a cold desert is automatically seen with a halo and gown).

Then, Jennie and I clamour into a tent for a nap. The darkness reeks of sweat, socks, and runners who also haven’t bathed for days. But at this point, does it really matter? You’re freezing, you’re swaying in fatigue and in pain all over. Just lying on flat ground is a luxury. The desert really does teach by taking away.

– It is still the 63rd kilometre. I wake from a deep but short slumber. The first thing you register is how toasty your sleeping bag is. The second thing you register is dread: is it really necessary to get out of the comfy oven of a bag and head back into the freezer again? In the twilight of your conscience, a little voice asks why you signed up for this in the first place.

– It is the 70th kilometre. Jennie and I talk anything and everything that can help us keep vigil through the night. We talk about life back home and about unlikely cravings that we’ll need to see to once we get back to civilisation (“a big, fat burger from the depths of the worst fast food joint. The burger will be greasy. Actually, the greasier the better.”)

Above us, the colossal piece of cloud is still hovering steadily, its tips stretching from end to end of the wide desert horizon. I wonder at its refusal to disperse, at its familiarity from previous nights. Then, in a moment of startling clarity, I see it for what it truly is: I am not staring at a large band of cloud, but into the very depths of our Milky Way and the universe itself.

The band of white is formed by stars, so numerous that they litter the night sky and glow as one. If you try to count them you would be lost by the first dozen, such is their vastness.

It is the greatest shame that, for all the images I have to share of the race, I cannot bring back the one most enduring scene of the entire journey: our world cloaked in the darkness of a moonless night, the undulating horizon of sand dunes and mountains backlit by the blue/yellow glow of civilisation, and a sprawling night sky that starts from the fringe of the horizon in a deep blue hue, then bleeds into perfect blackness in the space overhead until it meets with the dizzying spell of stars piercing through its canvas. Right then, the spellbinding notes of “Go the Distance” from Disney’s Hercules turn up on the iPod just as a pair of shooting stars dazzle across the sky ahead.

It is the most wonderful thing, to witness first-hand the grandeur of the world around and above us, to realise that there is so much more to the world than our immediate existence, to feel a pang of insignificance but to then be swept up by a burst of awe and pride in being a part of it all in the first place.

In this moment, suspended between rapture and exhaustion, I know in my heart that this scene will live with me until the day I die.