The slow trek up the massive slope in the early stages

If Stage 1 had been a survivor’s trek, then Stage 2 was an epic beauty parade for the Sahara – everything one could have dreamt about of the Great Desert came true today in ways far grander than the imagination could accommodate.

I say, this climb looks rather steep.

We started on a gentle but never-ending ascent up a massive slope of sand. To our right, mountains protruded from the horizon; to our left, undulating dunes ran the length of our course. Throughout life, we have all undoubtly come across images of desert dunes and created an archetypal impression of how these awesome constructs look like. Nevertheless, when you find yourself up close against one, there are still elements about a sand dune that will take you by surprise.Though the slopes of the dunes were gentle gradients of colour that turned from brown to yellow depending on how the sunlight hit, the ridges of the dunes were outlined with a starkly different colour. The contrast gave the ridges a razor-like appearance, so sharp that they looked as if they might cut open the sky.

Check Point on the slope!
Once past the slope we hit a plateau of hard packed sand and rocky outcrops. It was nothing much to look at but great for proper running. I tucked the trekking poles beneath me and shifted to high gear, pushing past table top mountains that came straight from the first scene of some long-forgotten boyband video. 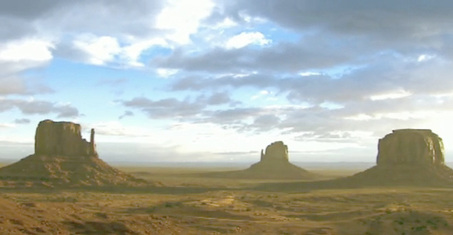 Needless to say, the photographer in me was happy as a daisy and I had a good, hearty run in high spirits. At Check Point 3, I was greeted the promise of a quick downhill run before reaching camp. And what a downhill run it was.

Hidden just around the corner is one VERY, VERY steep run

It never quite hit me how much we had climbed on the ascend earlier until then. I set off from the check point and turned a corner, suddenly finding myself staring at a near-vertical drop.It’s a shame that the photo hardly captures the reality of the course since the infamous drop off is entirely hidden behind the rocky outcrop above. But perhaps not everything could or is meant to be brought back from the desert.

We came from up there?! A look around midway through the steep descend.

“Thrilled” is an understatement – I just couldn’t believe my eyes. Today’s course was stunning and I was actually running across this beauty! I’m in the bloomin’ Sahara Race running across a desert on foot! It finally dawned on me and the thrill was beyond words. If it weren’t for the fact that staying out too long would have led to dehydration issues, I would have happily camped there for hours, just meditating on the view.

Nothing but sand, stone, and sky.

So onwards it was with the little pink flags pointing the way home. Note to self: things in the desert are further than they look. 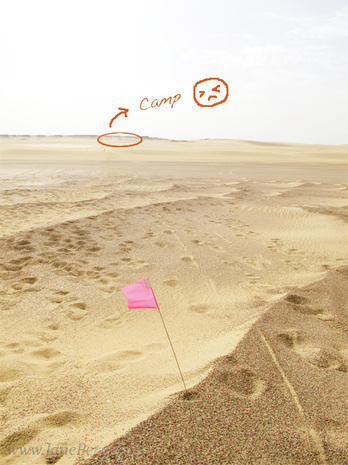 Yes, those pitiful specks in the distance really is camp.

The last leg of Stage 2 was spectacular. We entered an area that looked like a literal Red Sea, where years of wind action carved waves upon waves of red and yellow sand across a flat plain. It has been said that the Sahara has the presence of an unseen ocean; right then, it wasn’t terribly difficult to imagine you were standing at the shallow shores of an endless sea, with the waves gently lapping at your feet.

As the hours rolled by, the interplay between the sun and clouds also created some magnificent views of the desert in shadow and light. Despite the fatigue from climbing over 150 metres on yet another 40C+ day, I had a cracking time.

Passing cloud cover casting a shadow on the foreground and lighting up the sand dunes in the distance.

Here’s a general fact of life I’ve learned from this race: if it looks too good to be true, it probably is. Camp 3 was set high atop a hill, beautiful to look at and even more beautiful to look from. But the compromise was to catch the desert gail in all its ferocity. That night my tentmates, who are usually more than happy to sleep outdoors, opted to sleep inside for cover. But even then, the sand got everywhere. Wind blew in from every direction possible. Falling asleep to the whumpf whumpf whumpf of the desert gail hacking at our canvas tent, I felt a layer of sand slowly building on my face. This must be how it feels like to be slowly buried alive.

All smiles after a hard day’s work!