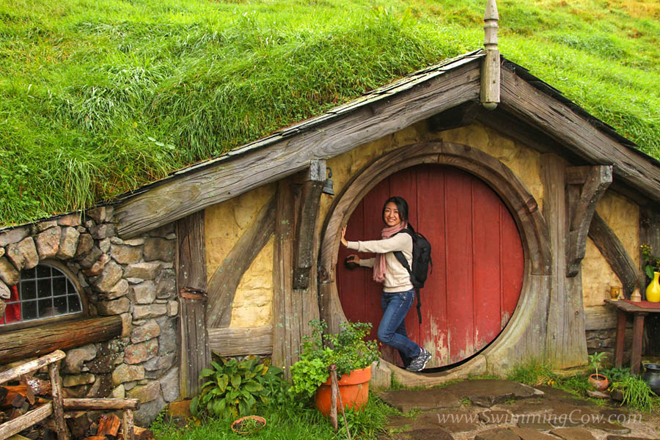 Today I died and went to Tolkien heaven. And if you’re also a fan of the Tolkien books or the Lord of the Rings/The Hobbit movies, make sure the Hobbiton tour is included in your New Zealand trip.

The set is stunningly real. Every last bit of detail was taken care of – moss (actually a concoction of dye, sawdust, and yoghurt) was painted onto well-worn fences to create a “been here forever” look, every hobbit hole’s mailbox had little paintings on them that no doubt were meant to reflect the inhabitant’s personality/character, I spotted cloves of garlic hanging from a hobbit hole window – there was even hobbit laundry hanging on clothes lines! All in all, it was so realistic it was hard to believe we hadn’t been truly spirited away to some distant land where the hobbits really lived. I was expecting Bilbo or Frodo to just pop out from around the bend.

Our tour guide, Sam (a.k.a. Samwise), regaled us with stories from the film production. Did you know that Gandalf/Ian McKellen was actually riding on a small Icelandic pony so that he would seem much larger? Also, in several scenes, he was actually standing on a stool beneath all his robes so that he could tower over the hobbits. And I can also now proudly say that I’ve stood at the exact spot where he had set off the fireworks from his cart in LoTR 1. They also went to the trouble of building a tree on location leaf by artificial leaf.

There are lots more fascinating movie trivia but I’ll leave it to you to discover for yourself when you join a Hobbiton tour.

For now, I’ll let the pictures do the talking:

Gorgeous view of Hobbiton from Bag End (Bilbo and Frodo’s house). You can see the Green Dragon Inn on the far end of the pond. And notice the Party Tree on the left!!! Die-hard Tolkien fans rejoice and dance. (Although given the hoards of tourists coming through to see it these days, it’s probably better renamed as the Money Tree)
左上角的 Party Tree 二十多年前差點被農夫砍下來。 幸好這棵八十來歲的大樹最後還是存下來， 並成為魔戒／中土的一部分。

Hobbits’ harvest J Peter Jackson insisted on growing farm produce for the filming so what you see in the movies is real and edible. 這些蔬菜都是真的， 非電影道具。

Every mailbox was painted to reflect the personality of the resident hobbit. 每個哈比洞門外都有一個特式的郵箱

Every hobbit hole was furnished with loving attention, right down to the garlic cloves in the window to create that “lived in” feel. 電影場地細節不漏，效果逼真。

Too charming for words. What I’d give to live in Hobbiton! 好想搬入去！

Chopping up wood to prepare for the winter ahead. Can you spot the (real) frog in this picture? 你能找到相片中的青蛙嗎？

Shovel, ladder, mossy fence and pots of plants. This scene reminds me of a storybook English cottage. 典型的小房屋

And the legendary Bag End! I half expected Bilbo or Frodo to pop out behind the door… 這個哈比洞好像在哪裡見過。。。

The tour ended with a pint of ginger ale at the Green Dragon Inn, which also makes multiple appearances throughout the movies. I can’t adequately convey how surreal it was to be sitting in a big armchair in the Green Dragon Inn, with ale in hand in front a crackling fireplace. Some days are just better than most.

Green Dragon Inn + Hobbit attire on a clothesline
(hey, there’s laundry to do in Hobbit heaven too!)

#Tip 16: Keep it interactive
Don’t just wait to be led around the hobbit holes. Make the most of your Hobbiton tour and be proactive in asking questions. The tour guides are very knowledgeable and many are true fanatics of the Tolkien franchise. Sam, for instance, reads Elvish and has met Peter Jackson himself. You can imagine the wealth of information the guides have to share.
landscape nature new zealand 2013-06-22
cowbell
Share !
Previous: New Zealand Day 12: Queenstown
Next: New Zealand Day 14: Devonport