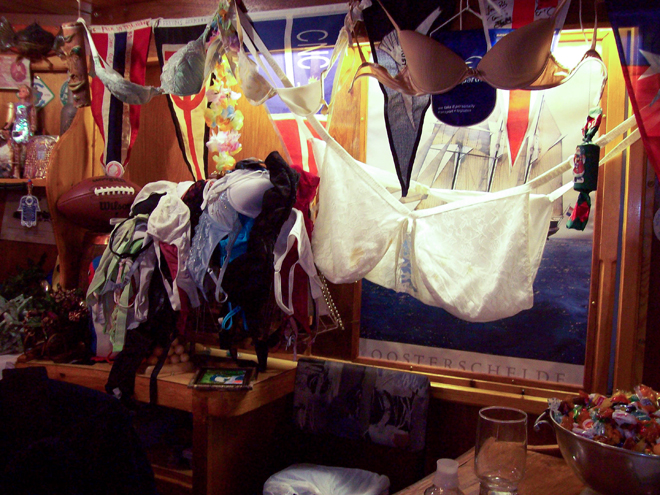 When you start getting into Ushuaia, lots of random things like “The Southern Most Irish Bar in the World!” start popping up. (I tried it; it was rubbish.) It gets to a point where it’s mere commercial cliché. Still, there is something to be said about the fact that you’ve danced and partied in the southern most bar in the world. This bar happens to be located in the Antarctic research station, Vernadsky. Presently owned by Ukraine, this was a British station that was sold to its current owners for the grand total of £1 ($2) back in 1996. There’s a backstory for this sale, but I’d much rather tell you about THE BAR.

Now, there is an Antarctic saying that goes, “In Antarctica there’s a woman behind every tree.” And we all know how many trees there are in Antarctica. The rarity of the fairer sex is probably why the Vernadsky bar is so… creative in its forms of acceptable payment.The bar sells homemade vodka shots for $3. If you don’t want to pay that, ladies have the option of giving them their bra instead. This research station also claims another fame– this was where the Ozone layer was discovered back in the ’80s! Yay for homemade vodka and important scientific advances! Oh randomness and happiness!

antarctica cold cruise 2009-01-25
cowbell
Share !
Previous: Ironies and Felonies
Next: Once the seed is sown, there is no telling how far we will go