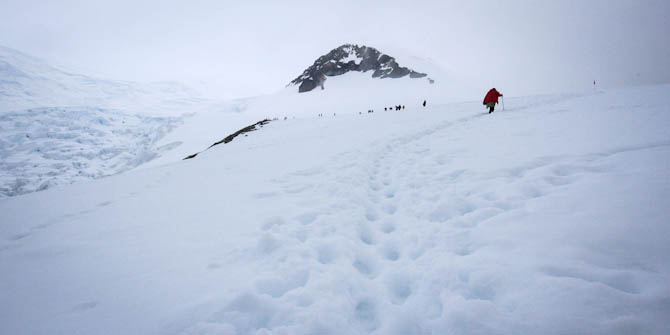 One thing about trains– it doesn’t really matter where they’re going. What matters is deciding to get on board.” – The Polar Express

Ideas are sneaky little things. They start in a whisper, prickling your ears like an innocent dandelion. But before long, they take on a life of their own, and the sheer possibilities from that one seemingly innocuous suggestion spread like a wildfire in the mind’s eye. Soon, you are planning and plotting the next big adventure as if it would really happen. The next thing you know, you are on a ship heading due south with nothing but carry-on luggage.

My trip to Antarctica began most innocently. Visiting The Ice was always at the back of my mind– but as is the case for so many people it was nothing but a little fantasy, just crazy enough to keep myself sane, to keep life interesting, to keep the options open. Then, one day, I came across a traveller’s website about her trip to Antarctica. The pictures were small, and the selection of photos somewhat limited. But she spoke of the land and of its ethereal beauty, of the icebergs that were bluer than the most electric blue. She spoke of the timelessness of the continent where the summer sun never set, of how the rest of the world had simply faded away between the blue and the white.

Then I walked out of my dorm room and plopped one of my most well-travelled and open-minded friends down on a couch. “Tell me, Ben, on a scale of 1 to 10 how adventurous do you consider yourself to be?”

And so what began as an idle weekend surfing online ended with my packing bags, camera, soul and all to head to the last frontier on Earth, Antarctica. Though it would have been nice to simply report that the rest of the world did indeed fade away as Sharrie had promised, I think I owe it to you, my dear readers, to tell the truth: the rest of the world did not fade away down in Antarctica and, if anything, had become more vivid.

It is the strangest thing, but at the end of the Earth where life is scarce and precious, friendship blossomed between people who may otherwise have never met in life. We were a random ensemble of passengers from 15 countries, united by our sense of adventure and our desire to see the White Continent. Every person has a story of why and how they are here, and every story is as fascinating as the next.

To reach the southernmost city in the world where we boarded the Orlova, a family from Mexico had driven all the way from Mexico City. An American woman had lost her husband several years ago and had been devastated. This is her first solo trip since her loss. Another deceptively young-looking woman is in fact 39 years-old. She chose to spend her 40th birthday onboard with us, visiting her seventh and last continent. A newly-wed Belgian couple is here on their honeymoon, except the wife had no idea she was going to Antarctica because it was a surprise gift from her husband. She did not find out until she saw the ship.

Someone decided to propose here; someone else decided that, at the grand age of 82, he would finally go see the White Continent. Someone decided to bring pastels, while another brought watercolours. All these decisions, big and small, brought us together onboard the Orlova to create a journey that was uniquely our own.

And I will never tire of the stories.

One night, sitting in the library as the Orlova rolled on through the dim hues of the twilight hour, Luis told me of his family’s road trip from Mexico all the way to Alaska. He spoke of the Aurora Borealis that streamed from the heavens overhead, and of another couple’s cycling trip that took them from Fairbanks, Alaska to Ushuaia. It had “only” taken them a couple of months to get from the northern most tip of North America to the southern most tip of South America. And to think that my month-long Nile River cycling trip was epic. As the Chinese saying goes, there is always a higher mountain.

The world is a large and endless place, and I understood this most vividly onboard the Orlova, listening to the tales of fellow travellers and to the tales of others they had met along the way. Somehow, in floating past the glacial peaks of Antarctica I had also come to understand the true strength of Humankind.

As a child, I was raised on the notion that if you set your heart and mind to something enough, there is nothing–nothing– that you cannot accomplish in this world.

The human spirit is one of the most awespiring things to witness and to experience first hand. While we cannot outlive the mountains, we can scale them while we are here, and the question of how far we will go is limited only by our own imagination. A task that once seemed so grand as to be virtually impossible to fathom is often unraveled one step at a time. And when at last you turn around and look back at the path you have trekked, you will find that you have climbed further than you had planned, and higher than you ever thought possible.

View from the bottom of the mountain. The task ahead is… steep.

Slowly making my way up

At the end of the climb

antarctica cold cruise 2009-01-26
cowbell
Share !
Previous: The Southern Most Bar in the World
Next: To gaze into the face of Purity itself