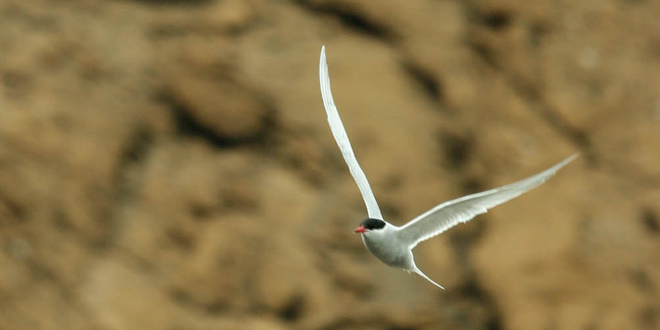 Day 7 was a day of wind. Of the many, many unforgettable things that happened today, the bellowing winds that swept the bow where we stood was the one element that carried the day. But I am getting ahead of myself.

This morning saw us sailing into Deception Island, a semi-dormant volcano just off the Antarctic Peninsula. It had last erupted in 1969, a blink of an eye in volcanic terms. Our geologist Gustavo jokingly told us to be careful, although come to think of it when a volcano suddenly blows in Antarctica, what are you going to do? Run up the highest hill and hug a tree?

(This is impractical on several levels. First off, said hill is the caldera, the mouth of the volcano from which lava will be spewing. Secondly, there are no trees in Antarctica.)

Anyway, the journey into the caldera was gorgeous; having left the Antarctic Peninsula the weather was wonderful again with broad strokes of clouds streaking a perfectly blue sky. What a view, to be able to turn towards the stern and see white landmass of nothing but snow and ice and then, standing in the very same spot, to look towards the bow to see a perfectly brown island. Dirt! Well, ash and cinder. We have not seen this volume of unadulterated brownness for a while.

(Side note: Deception Island is so named because the opening into the caldera is so small that back in the day sailors often had to sail around the island twice before they could find the entrance.)

Penguin A: Ahoy, matey! There be a ship yonder!
Penguin B: Pillage, I say!

We landed on a black beach of silt billowing with white steam, evidence of geothermal activity beneath that was continually evaporating the water. Although the wind was still chilly at near-freezing temperatures, the ground was perfectly warm to the touch and one would inadvertently leave footprints in the soft, bouncy soil.

If you were young enough, you could pretend you were on a massive bouncy castle. Also entertaining was “the Flight Experiment”. If you stand by the edge of the beach where there was the most steam, spread out your arms as if you were flying, and fixed your eyes on one spot on on the ground just staring at the steam blowing by, you would very suddenly feel like you were truly flying through clouds. Amazing. I taught the trick to Laurie, and her smile was just gold.

Steam rising in front of Neptune’s Window, from which Antarctica was first spotted

In the mist, two pairs of penguins were diving in and out for their morning swim. We poked around the houses that once formed the whaling station here. How strange it was to be walking amongst the towering tanks and hollowed houses, each of them telling a tale of the damages done in years past by both Man and Nature. The lopsided tanks were scrawled with graffiti and sat partially submerged in the now solidified lava of the 1969 eruption.

Scale of the abandoned whaling station

The highlight of the morning was the POLAR PLUNGE. I didn’t even know there was such a tradition on Antarctic cruises, and so came sans swimsuit. Thankfully, my cabin mate, Mary, had hers and kindly lent it to me so that I could “represent the cabin”. And represent I did, dashing into the 1°C water after doing a little dance on the hot, hot sand.

If I ever have to dunk myself into 1°C water, it might as well be in Antarctica.

And… it was COLD. As I said about my Nile River cycling trip, “that was fun; let’s never, ever do it again.”

Still, the certificate we got for doing The Plunge was more than worth it:

“This certifies that (First Name, Surname) did most sturdily enter the invigorating waters of the Southern Ocean at Latitude 62° 56′ South and Longitutde 060° 36′ West… We do solemnly acknowledge that this was an act of indubitable courage (as well as extraordinary, incomparable foolishness). Based on the Expedition Leader’s observance of this act of absurd heroism, and the Ship’s Doctor’s confirmation of said person’s temporary loss of any common sense, we consider the bearer of this certificate a key member of the Antarctic Polar Plunge Club.”

You only live once.