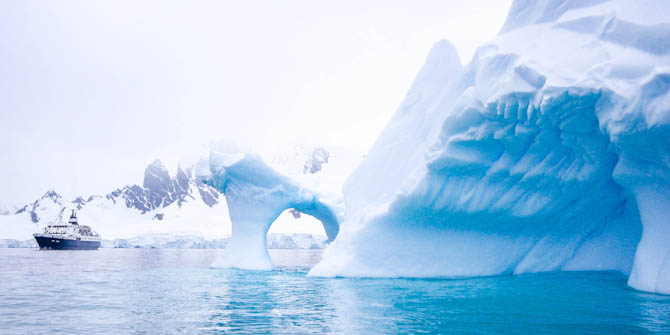 The human memory is so fragile. After two and a half days at sea, I am already beginning to forget how it feels like to be standing on dry, still land. The days of going for meals in the ship’s dining room where the table cloths are deliberately wet to prevent anything from sliding around, where chairs are bolted down (because occasionally they really do tip over on one side, even when you’re sitting on it) are beginning to feel routine.

But just as the memory of stationary land begins to fade, icebergs the size of football fields rise from the horizon, heralding the arrival at the continent proper. Since crossing the Antarctic Convergence the air has become colder, crisper; the rolling of the Orlova (lovingly dubbed the “Rollover”) ceases as we leave the open sea for more protected waters.

We pull on our landing gear for the first time, the tedious procedure of donning sunscreen, coat, hat, life jacket, gloves, sunglasses, waterproof trousers, bulky boots and camera gear is physically demanding enough to replace an entire session at the ship gym. (Who am I kidding? I never once went to the gym onboard throughout the 10 day cruise.)

The Orlova anchored at Cuverville

Zodiac cruising around Cuverville. (Can you spot a Blue-eyed Cormorant in this picture?

To jump or not to jump, that is the question…
there is a Leopard seal in there somewhere after all…

The Holy Grail is actually in Antarctica, folks.

Gentoo penguins preening on an iceberg

Our first landing in the Antarctic Peninsula is Cuverville Island, a Gentoo penguin rookery just off a bay full of the most fantastic icebergs. Let me just say one thing: every picture you see of Antarctica is pristine and white; the penguins are adorable and very huggable. What they don’t tell you is that they smell– a lot. In fact, you smell ’em before you see ’em. Technically, it’s the guano that’s causing the stench-induced seizures. And as the zodiac brings us closer to shore, we see that the snow is not in fact all that white, but is tinged by the guano into more of a salmon shade of pink. Where there isn’t snow, bright orange lichen and green moss cling to the bare cliffs. A couple of stray whale bones are washed ashore. A Leopard seal is patrolling in the shallow waters. David Drummond, our ornithologist, tells us to watch out for it because it’s going to “make a real mess out of one of these penguins”. Skuas are nesting further up the hill, pouncing on Gentoo eggs and chicks whenever they get the chance.

The Gentoos amble along their “penguin highways” etched out in the snow, narrow paths that lead between their nests on higher slopes down to the rocky beach. Having a comfortable nest is critical during this nesting season when both the mother and father penguin have to take turns sitting on the egg/chick for protracted periods of time. So the penguins shuttle industriously back and forth the nest and the beach, meticulously picking one stone at a time and carrying it all the way back home. But it is a tedious task and good stones are on shortage, so “borrowing” between neighbors is common. Once, researchers did an experiment by building a fake nest with little blue stones. By the end of the day, the nest was gone and every penguin nest had a blue stone in it. :)

2009-01-21
cowbell
Share !
Previous: The notion of sea voyage…
Next: I formally conclude that Shackleton was a little nuts